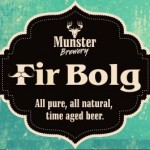 Malt Heavy with a healthy balancing dose of hops, Fir Bolg aspires to its mythical name. The Fir Bolg were one of the original clans that inhabited Ireland. Fir Bolg can have various interpretations such as ‘men of bolg’ or ‘man belly’. It is possible that ‘bolg’ is a derivation of ‘boat’, an explanation that the clan may have arrived by boat to Ireland.

We’ve chosen the name because of its literal meaning which our malt heavy and hop strong lager requires – A deep, malt tasting sensation superbly balanced by a large hop boil addition which requires a lot of ageing to mellow into this fine beer.

When the Firbolg were defeated in battle, they were allowed to retire to Connaught for their display of valour and bravery – something Firbolg drinkers can now honour with this hardy tasting lager.

We’ve chosen the finest malts for this beer which packs a tasty punch – Munich and Vienna malts along with some caramel plus a fine sized balancing dose of hops.  This lager is all about the malts. They are to the forefront, smacking you around a little bit. You’ll thank us this has been left to age.

Like all our beers, Fir Bolg is bottle conditioned so some sediment may occur in the bottle. If you have bits in your beer, celebrate that you’re smart enough to choose a beer that’s natural, pure and brewed in traditional fashion.

Serving: Pour into glass leaving the bottom sediment in the bottle. Best served at 4-6 degrees celcius.

One thought on “Fir Bolg”