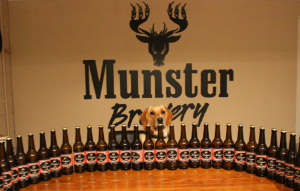 Whilst we could write a treatise on alcohol laws in Ireland, we’ll keep this short to keep it (somewhat) coherent.

It’s already acknowledged in Irish law that breweries can sell direct to the public. But the legislation is so old it badly needs to be reviewed.

The law as it currently stands states that breweries can sell a minimum of “four and a half gallons or two dozen reputed quart bottles” to a member of the public. Translated into modern parlance, that’s about 41 bottles of 500ml beer or 62 bottles of 330ml beer. Forgive us if we’re wrong – we haven’t measured in quarts since eh, never.

Now spin me round and call me stupid, but in an age of promoting responsible alcohol consumption wouldn’t it make far more sense if this was the maximum that could be sold by a brewery to a member of the public rather than the minimum???

Lets just take some examples – the person who drives to visit a brewery and therefore doesn’t drink. Or the tourist who arrives off a Ryanair flight and bus-hops it around Ireland. Are breweries really meant to insist that the sensible driver and the befuddled tourist each buy 41 bottles of beer should they sensibly want to try one at home or return with a gift? And whilst it’s easy for us to direct them to local shops and pubs to buy an odd bottle, for rural breweries, the closest can be a detour miles away.

We won’t even start about tap-rooms and farmers markets which can provide further local employment opportunities for the burgeoning micro-brewery sector and which are common in other countries and haven’t led to a collapse of civilised society or a waste land of closed shops and pubs.

So, if the lazy feckers that be don’t feel like dragging Irish alcohol laws into the modern era, how about they just change one simple word in the existing legislation from minimum to maximum? Job done.

4 thoughts on “Why this dog can’t sell you a beer.”