Whilst others might forget about New Year’s Resolutions by mid-March, not us. We take them super duper seriously. Planning for them even begins in December we’re kinda embarrassed to admit.

But first of all, it was a hectic 2016 and a big fat thank you goes out to all the family and friends who spent endless bouts with us bottling, labeling and boxing (each other at times…!). And of course, the same again many times over to anyone who bought one of our beers.

One of the things we’re proud about achieving in 2016 was brewing Ireland’s first certified organic beer. When we started brewing all those many many years ago(!), we knew we wanted to brew beer as naturally as possible. Even in our non-organic brews, we keep everything to a minimum, leaving time and temperature do most of the work. So it was more a natural step rather than a gigantic leap for us to brew an organic beer which is fully certified by IOFGA – the Irish organic organisation. And for 2017, we’re delighted to be increasing the range of our organic beers of which more later.

For a while now, we’ve also been looking at ways of being more environmentally friendly. Generally, what’s good for the environment is good for us.

So for 2017, we’re going a step further. We’ve delighted to say we’ve just signed up to the Climate Neutral Now programme, where we promise to reduce emissions and offset any unavoidable ones by buying carbon credits. It’s an extra expense we don’t really need but one we’re happy to pay.

We’ve gone and committed the entire brewery to the Climate Neutral Now programme so we’re busy as bees monitoring energy usage and fuel. We’ve even a whole new set of spreadsheets to complete keeping track of data which we’re obviously absolutely thrilled with. 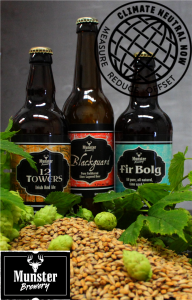 And best of all, you don’t have to be a company or business to sign up – individuals can do their bit also. So if you want to take a gander over to the Climate Neutral Now website, it’s easy sign up and do your own little bit to combat climate change.