It was 2013, the middle of a recession and money was hard to come by.

What better time to set about opening a craft brewery.

Twin brothers Padraig and Adrian Hyde decided to take the plunge and follow their hearts on brewing beer that is pure and brewed the way nature intended.

“It was scary as hell. We were plumbers, builders, welders, accountants, customs and excise experts, brewers and sales people at all hours of the day. You’d roll in the door for dinner at six, be back in the brewery for seven and hit the bed at three in the morning only to repeat it all over again. Scary, but we had good fun.”  – Adrian

“We’d have finished building that brewery in half the time except for Adrian.” – Padraig.

We launched in 2014 and everything we made, we pumped back into the brewery. What money we had, banks had even less – they were just about kaput themselves with the property crash and just weren’t lending. But we didn’t care. Looking back now, we don’t know how we did it other than to just keep going. Every cent went back into buying more tanks, pipes, pumps, better testing equipment – it really was a time of just going for it no matter what, a philosophy that continues even today. We had a vision and it was a case of either make it happen or it can break us trying. Growth was organic, word of mouth type stuff. We didn’t have large budgets for fancy marketing and branded vans and glasses remained a dream so it really was exciting to realise that we’d soon outgrow our home such was the demand.

That year really flew by. We started out distributing ourselves and were really thankful to every pub and off licence that supported us. Soon we had to take on a distributor and things really began to roll for us. By 2015 it was crunch time. Our original home was just too small. You couldn’t swing a cat inside there. Figuratively speaking. So we took our second big plunge and moved to a larger building. The downside was we lost a couple of months while we moved. The upside, finally, we had space for a tasting room! And to swing a cat.

We look for this on all our grains.

It’s 2016 and we’ve just about finished the Big Move to our new home. It allows us to do so much more. We are as committed as ever to our goals – of bringing people to craft beer, brewed naturally and without chemicals. For us, Beer is Food (not that we survive on beer alone!) and we believe people are what they eat. Bad food brings bad health and bad beer brings bad health. We have a mission – to convert people from chemical laden foods to natural foods. From watered down rubbishy beer to real beer. Beer with taste. With Passion. Beer that pushes the boundaries. We use more hops (we’ve even grown our own), more malt and leave it condition longer until it’s just right. Through all the rough times of starting up (and it was brutal), we never stopped believing in our beer or what we were doing. There are no short cuts. It’s summed up in our motto; 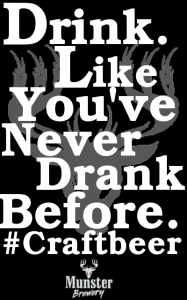 We hope you enjoy our beers and look forward to welcoming you to our brewery.