Our brewery is an 8 barrel system. Each brewers barrel is roughly the same as 163.6 litres or 287.90 pints. Which means we have ourselves a nifty 2,300 pint brewery.

We’ve pretty much assembled the brewery ourselves (ok, we didn’t fabricate the tanks nor install the electrics…) with items coming from all over the world. Starting out, we didn’t have hundreds of thousands to throw at electronic and automated systems so our brewery was something we literally put together ourselves. On the plus side, that gives a level of control and craft that you just cannot get by pressing buttons on a control panel! 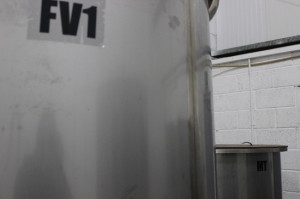 Fermentation Vessel with mash tun in the background.

We have one kettle, one mashtun and one hot liquor tank with the remainder of tanks being fermentation vessels. All are made from shiny stainless steel, clad with timber for insulation. It’s a brewhouse like no other and a brewery that we are continually improving.

We’re currently in our second home. It all started in a 1,300 square foot unit in 2014 and by 2015 we were squeezed for space. Working meant maneuvering around stacks of grains and bottles and gymnastics in the brewery was strictly banned. By mid 2015, it was just too small for our growing brewery so we took the plunge and moved – across the road –  to a much larger unit where we are now.

All the experience of putting together our first home paid dividends for our second home. When we started, we were pretty determined that we would be in total control of the brewery and the direction we would take. We didn’t want the pressure of a bank manager screaming at us for sales. We wanted to brew beer that we loved. We shrugged at the lack of finance available from bankrupt banks at the time and just went for it with what we had. So many times we were told that we’d need a sixty grand piece of equipment but the truth is that if you want something bad enough, you’ll figure out how to get it – maybe without the bells and whistles. Our brewery was very much an operation that grew as we grew and with every cent made re-invested back into it for extra equipment and tanks – a process that we’ll admit is still ongoing! We’ve since added an extra fermentation tank with a small 2k loan from the Cork Local Enterprise Board and in late 2015 we added two smaller tanks to allow us produce special brews.

Our second home we moved into at the tail end of 2015. A platform for the brewhouse, a tasting room and bar, larger conditioning room and better floor layout that would seem run of the mill in a professionally designed brewery were all things we undertook ourselves over long days and even longer nights. We’ve never really done things the easy way though and even through the madness of building a brewery, holding down a dayjob and juggling families (thanks families!) it really was a time like no other.

All our processes are undertaken by hand – the most labour intensive being bottling which can consume a day to get through one of our fermentation tanks. But at the end of it, the beer that ends up in a bottle leaving our brewery is something we are proud to have brewed, in a brewery like no other, one that we’ve put together ourselves. It’s been a fantastic journey.

In time, there will be a fancy graphic here explaining how beer is made. Until then, we’ve done it the old fashioned way with much text and nifty pictures. 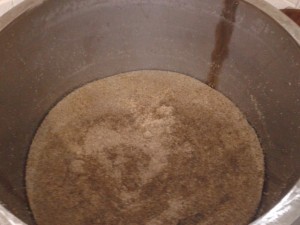 Looking into the mash tun after extracting the wort

Much of our grain we mill ourselves, crushing it to allow the water better access to the centre of the barley. Crushing it too much and you end up with lots of sugar in the mash but also a stuck mash, the husks of the barley unable to form a filter bed in the mash tun. Striking the right balance in the crush is important so milling is probably a job left best left to those of a serene nature. We use various malts in our beers, our preference is for Irish grown malt which thankfully, more farmers are supplying to smaller breweries. There’s a gap in the market for Irish speciality malts which we have to import from the UK and Europe.

The next step of the process is mashing, which takes place in the Mash Tun. Water is heated to various temperatures and the grains left to steep in it. The aromas from the mash tun are fantastic – it really fills the brewery and is pretty much a unique aroma. The goal is to convert the starches in the malted barley into fermentable sugars which will be utilised by the yeast during fermentation to make beer. After mashing, you end up with a sweet liquid known as wort. 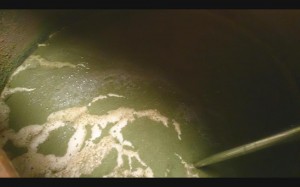 The aftermath of boiling the wort in the kettle – who’s on cleaning duty?

Wort is boiled in the kettle (AKA copper) during which hops are added. The sweet aroma of the wort changes to a more bitter profile as the hops are boiled. Hops added at the start of the boil are for bitterness. Hops added at the end of the boil are known as finishing hops and add flavour to the beer. A key element for any new brewery is producing a consistent finished produce which means the same amount of hops must be added at the same time in the brew process.

From the kettle, the wort is transferred into the fermentation tanks and crash cooled. We crash cool by passing the wort through a heat exchanger – the hot wort moving in one direction and water moving in the other. The end result is cooled wort and hot water which we reuse for brewing and cleaning. 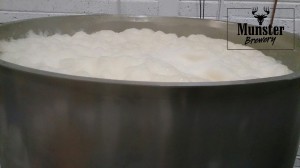 Once ready, bottling rears its head. We bought a small manual bottling machine and can see why people spend thousands installing automatic bottling machines! Still, there’s something immensely satisfying in labelling the bottle and capping it by hand.

Once bottled, we’re still not done maturing our beer! Bottle conditioning means the beer undergoes natural carbonation and maturation – no forcing carbon dioxide into the beer! Depending on the beer, bottle conditioning can take from three weeks upwards. We don’t rush it – It’ll be ready when it’s ready!